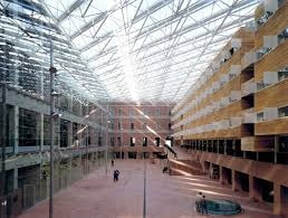 The first ESRA conference
Back in Barcelona, I was immediately involved in the final decisions concerning the organization of the first ESRA conference. This conference was sponsored by the business school,  ESADE, where I had a job thanks to Joan Manuel Batista, and the Universitat Pompeu Fabra. This support made it possible to ask an inscription fee of only €80 so that people from Eastern Europe could also participate.  My secretarial help, Steffi Huber, had sent around the announcement of the conference and we had received more than 350 applications. Daniel Oberski created a program for the administration of the ESRA and the time table of the conference, which was flexible enough to allow changes until the last moment.  The topics that were proposed by the participants of this conference can be found in the last time table he made for the conference. It is interesting to see what the topics were at that time and who were involved in the conference

The conference has been opened at ESADE but we had arranged to use a building of the Universitat Pompeu Fabra  for the conference. The advantage of this building, see picture, was that there were many class rooms for presentations at the first floor at the left side. One floor lower there was a big restaurant, coffee counters and there was a big covered space where people could drink their coffee and talk with each other.
​This was a very pleasant arrangement which we later also tried to find for the next conferences.

The excellent lecturer Colm O’muircheartaigh
As guest speakers were invited Roger Jowel of the ESS and Colm O’muircheartaigh (NORC). There were several panel  discussions on topics which also now would make sense. We also organized two special events: A visit to a nice Monastery close to ESADE and a conference dinner in a typical Catalan restaurant, Can Cortada
The conference was a big success and in a final meeting, it was decided that this conference would be repeated every 2 years in different places in Europe. We asked the participants for proposals and soon we received a proposal from the University of Prague for the conference in 2007
QMSS in Oxford
Like in 2004 also in 2005 a QMSS course took place, this time in Oxford. Structural Equation models was the topic of the course. I taught this course together with Germa Coenders. It was of course impressive to give a course in such an old university town. There were again a lot of very motivated students from all over Europe. We discussed again causal modelling with correction for measurement errors.

Writing this down, I wonder how it is possible that  we have observed in 2016 that in the published papers in the most important social science journals using survey research,  correction for measurement errors hardly ever has been applied. The table below shows this point.

Since 1971 yearly courses have been organized by the ECPR and the University of Michigan (Ann Arbor) and later also by the European Science Foundation (ESF) where the importance of correction for measurement errors has been taught. At many universities, this issue also is introduced every year. In all these courses, it is shown that one can´t trust the results of survey research without correction for measurement errors. Nevertheless these corrections were not done.
It seems that this approach is too complicated for applied researchers. This observation has led us to develop alternative procedures to correct for measurement errors in their research. Information about this procedure is available in the website of the Sociometric Research Foundation
New Research: Transfer Pricing Policies of Multinationals
Teaching at ESADE I was confronted with completely new problems, for example,  the  so called Transfer Pricing Policy. Antoni Dorse, who introduced it to me, was working in a Multinational company. Because he expected that the company would not be able to compete in the new world market situation, he had decided to stop working during two years and to study at ESADE to get a PhD degree.  He explained the topic for his dissertation as follows:
​
A multinational enterprise (MNE) can be seen as an internal market where products and services are exchanged. This internal market is similar to external markets in many aspects, but there is one major difference: Corporate managers of MNEs have the authority to define the “rules of the game” of the internal market. In business literature, the set of rules that manage inter-company transactions within MNEs is known as the Transfer Pricing Policy (TPP).
​
The TPP is the management tool to realize the aims of the MNE  by determining the prices for transfer goods and services (TP) between the different units of the multinational. How this TP is done is called the TPP. A simple model of TPP is presented below.

At that time I had no idea about the importance of this TPP but nowadays there is a lot of discussion about this problem without mentioning this term. The discussion is especially about the fact that many multinationals transfer their profits to one country where they pay the least tax. This is a typical TPP problem.
This was not Antoni´s problem. His problem was that managers, like him,  in different countries can´t show their capabilities because the results of their business unit was seriously affected by the TPP used. I will not go into details about his research.

One of the complications of this research was that management implies that a model with reciprocal causal relationships has to be used as indicated in the picture. Such a system can´t be studied with simple regression models that were normally used. If one also wants to correct for measurement errors then one automatically ends up with the application of structural equation models. To help with the research was a nice task for me.

Antoni did a very good job in his research, he made a very good dissertation, he presented his work also at conferences but, unfortunately, he was too much a perfectionist to finish his paper for an international journal. It was very interesting and pleasant to help him with his research. I learned a lot. In the end, he invited Irmtraud an me to visit the company where he had worked and the nearby town Vic, a very nice Catalan town with a nice surrounding.  The video illustrates how nicely we have been received in Spain.